The Connection Quotient – How a Culture of Understanding Transforms, Teams and Organisations

The Connection Quotient – How a Culture of Understanding Transforms, Teams and Organisations 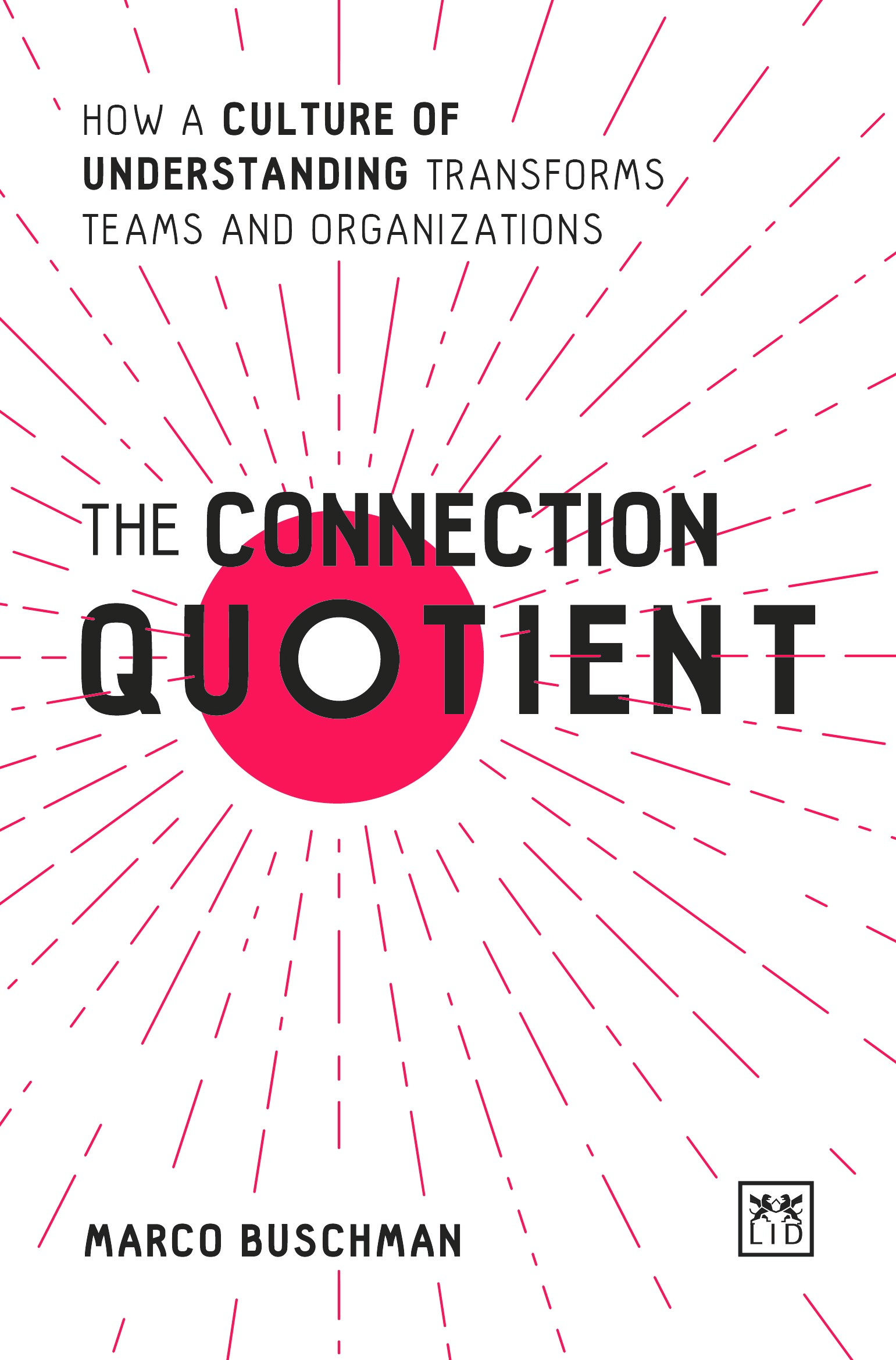 Connection is perhaps the most vital element of being a human being. Connection to self, others, a form of spirituality, nature, a belief, meaning and purpose.

So it’s not a surprise that someone would create a form of understanding of connection and link it to a range of parameters as we have with Intellect and Emotions (IQ and EQ).

Marco Buschman is clearly a connector and a student of others and the world. He has cleverly assembled a collection of elements from a wide range of sources many of us would recognise (Covey, Lencioni, Sharmer).

He’s cleverly built a story starting from you. How do you connect to yourself? This might seem trite to some, but if you’ve ever coached anyone and gone a little deeper into the coaching client describing themselves, it’s often revealed they haven’t thought about themselves that much. We seem to do a lot because we’ve picked it up from others, are conditioned by societal constraints and expectations and because our job demands it of us. So Buschman’s exploration of self is welcomed.

Buschman wisely instructs us on how to use this book before we dive in. A workbook, for inspiration or reference guide. Because it can be all that.

If you’re new to leading others. If you’re shifting roles from a tough, combative culture to a more socialised and gentler way of operating. If you’re moving to a position of influence from being a deep expert in one area. This book WILL be useful to you. I’d call it a ‘transition guide’ rather than a workbook (yet, of course, it can be a kind of study programme).

In the opening, Buschman (rightly in my view) tackles your connection to self. He even opens bravely with the sense of mortality. So if you’re thinking about a long-haul future this might be the last thing on your mind, but I applaud Marco for this ‘thought bomb’. It could force some very deep thinking early on into this book. He allows us to ponder and wonder then into a meaningful life, into dreaming big, and into those all-important patterns we’ll need to be mindful of in cause/effect; adjacent/direct; divergent/convergent.

It already feels like this book is coaching me. That’s a cute thing to do with literature like this.

As I move into other I’m intrigued. Not others, other. A clever look at things like ego. So it’s self but in an ‘other’ frame. In this Marco covers self reflection on the past (and a word from Portuguese I’d not come across before – Saudade. Loosely translated as melancholy but has no real direct English translate). Asking us to think of the past as a series of joyous events but also a tinge of sadness or regret or loss. It’s a useful balance as we don’t want too much gloom but equally, we don’t live in a land of magical unicorns and pixie dust.

David Maister’s Trust Formula is a helpful reminder to us on how we can trust ourself and others. And I particularly liked Marco’s use of the drama triangle coupled with the Supportive Connections triage. I also nodded profusely when Marco set Alfred Mehrabian’s word on understanding communication in the right context, not as a communication rule many of us are led to believe it is.

Use of Dr John Gottman’s Toxins in relationships was a very helpful steer when we moved onto our way of being in the sense of connection and relationship dynamics.

In connecting to leadership, there was a nice non-patronising tone to all of Buschman’s chosen references. Kouzes & Posner’s 5 practices and 10 activities will be a welcome frame for those making sure their leadership is of the connecting sort. And I was pleased to see some recognition of the feature of the leader as part of a connected web and less of the apex or even centre figure in a hierarchy or hub/spoke.

And then a finish with some useful reminders of the connection to the world and the macro-level impacts of footprints we leave in the world, to mentors and to adventures.

For some readers, it will be whether they’re truly connected to themselves and the need to connect to other, teams and the universe, that will determine whether they heed this useful set of interventions, stimulations and assembled wisdom.

So overall, did I become more connected to things? I’d say not. If I needed this book it was because of circumstances that had untethered me somehow. It just so happens that I spend a lot of my time in connected states, knowing about the impacts of being connected to all the things Buschman describes so was affirmative to me rather than inspirational.

Yet, to others in those states of transition, newness or needing to recalibrate – it would be a very useful guide and sense-check on how to make sure Connection Quotient formed a key part of my strategic sense of being and doing.

Marco Buschman is clearly a connector and understands the power in this way of being. I think this book is a ‘pass it on’ from his experiences and for that, I think he’s achieved his goal.