The Founder’s Notes – A Journey of Inspired Ideas, Work and Life by a Leading Serial Entrepreneur

The Founder’s Notes – A Journey of Inspired Ideas, Work and Life by a Leading Serial Entrepreneur 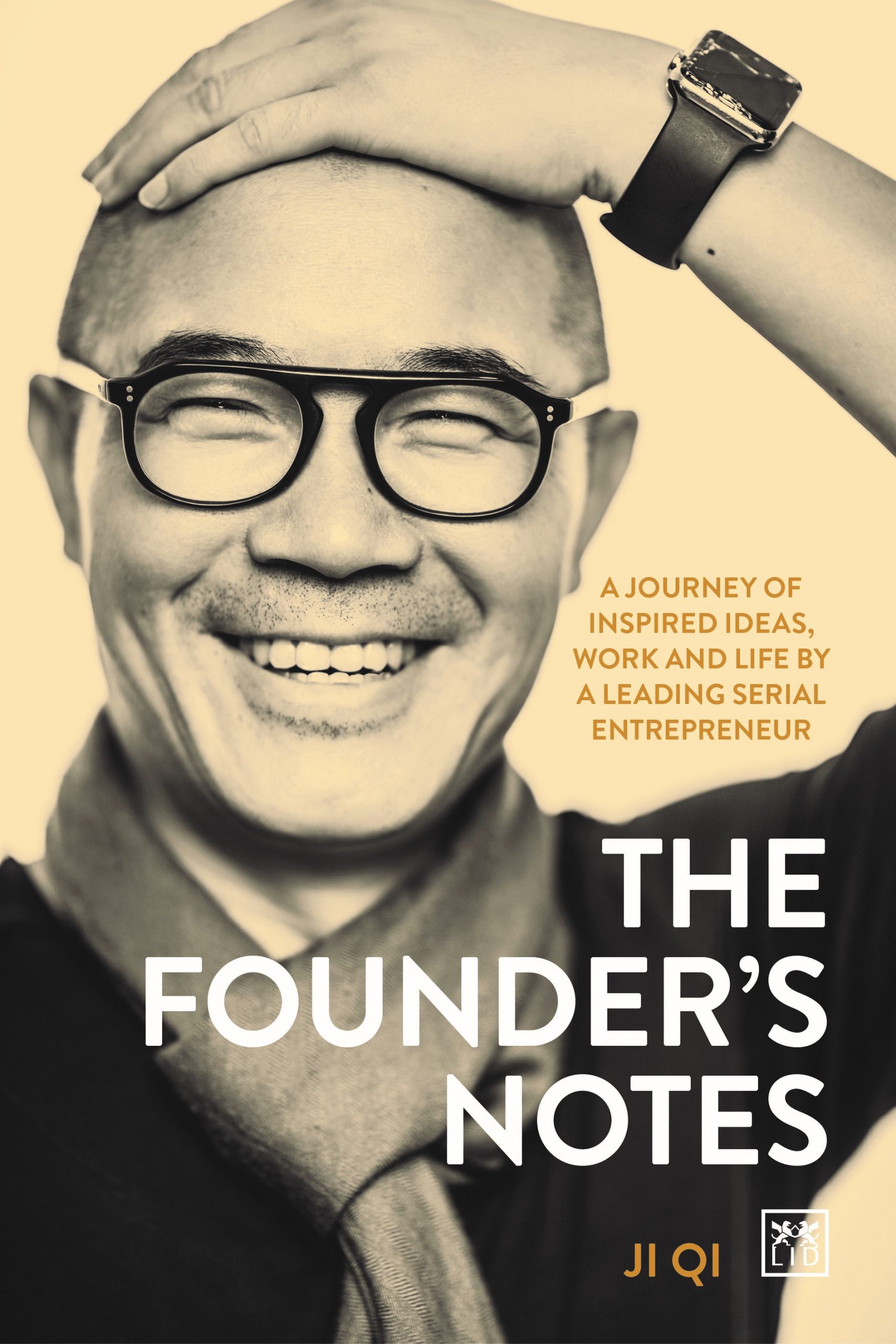 Whilst I have reviewed quite a number of books in my lifetime and expect to review more in future, I am reasonably certain I have never read a book like this before and I don’t expect to ever read a book like it again. Don’t get me wrong, as a lover of the written word  I have read some very original writings and I actively seek out challenging and differing views and I am always on the lookout for challenging and innovative writers but I must now confirm that I have never read and enjoyed a book like this ever before. I have read the book completely twice and revisited all the tagged pages and still I am scratching my head trying to think of what I can say about it. However, I feel I am in good company as Ji Qi himself has said in his book that “Ideas are boundless. Language and writing can only express a minuscule portion of ideas…….” So, I will do my best to persuade you that this is a book you must read and probably re-read on a regular basis.

Derek Landy once said that “Every solution to every problem is simple. It’s the distance between the two where the mystery lies.” He was never so right than when it applied to this remarkable piece of literature. The author Ji Qi is one of current day China’s most original and successful businessmen. Often described as an imaginative entrepreneur, he is credited with taking three companies to the 10-billion-dollar level in little over a decade. And now he has written a book called “The Founders Notes” which he describes himself as a “journey of inspired ideas, work and life”.

The commercial achievements of JI QI seem unmatched in the current circle of entrepreneurial geniuses yet it does not appear to me that he sees himself in the assumed role of a person whose whole goal in life is to set up businesses, take on financial risks and deliver huge success and profit. Rather, Ji Qi is a deep thinker who analyses and interprets every action and every experience he has in his life. From the biggest decisions to the smallest incidents this author reviews and interprets the impact and consequence of every action in his life and how it influenced the outcomes of his existence in the past in the present and in the future. Ji Qi takes a new approach to speculative or abstract reasoning and believes that the metaphysical has a much more significant impact and influence in our lives that we may care to accept or as he puts it “Knowledge affects action, the metaphysical determines the physical.”

This unique book is not made up of chapters and whilst it has structure I could not say with certainty that its structure in linear. What I can say with certainty is that it represents a beautiful picture of the workings of his mind as he has methodically captured his inner journey from belief to outcome and from unknown to entrepreneur.

Whilst I question my understanding of the linear nature of the book’s structure, I can say for certain that it holds a treasure store of Ji Qi’s thoughts and reflections on the meaning of life, work, and success. For any budding entrepreneur or leader they need to take note that these three aspects of Ji Qi’s thinking are in his view co-equal in playing their part in his successful journey, and furthermore, it opens up the window into seeing and hopefully understanding his thinking and decision making processes that have encompasses the abstract and emotional aspects of Chinese philosophy and how they influence every decision in his life no matter how big or how small.

I would also want to add that the writings bring an additional element to the book as they provide an insight into Chinese philosophy which clearly is essential for anyone seeking to engage and succeed within the exciting and growing Chinese economy.

For the practically minded among us I could confirm this book might be described as a collection of essays written by Ji Qi as he journeyed through three organisations that each ultimately became billion-dollar businesses. I might even suggest they cover many of the great hurdles or decisions he has had to make over his exciting career. I might even suggest that reading this book may help those who will eventually have to make similar decisions, but all of that only seeks to undermine this piece of writing and turn it into just another business book trying to sell you a solution or technique for success.

The book is beautifully written and flows very naturally as you read through it. The structure of Heaven, Earth and Humanity takes a little while to feel comfortable, but it is amazing how quickly you forget the subheadings and naturally fall into his writing style which is very empathetic story telling. From the very early essay on Steve Jobs to the spirit of the Wolf Dragon and the Horse you feel that the book is narrating to you like an elder statesman and you are the recipient of its wisdom.

It is not my style when reviewing books to spoil a publication like this by giving away too much of its punchlines but one such discovery helps to show that the book does not just hold philosophical thinking it also holds great truths and practices that can be applied by any reader. Leading a number of organisations of multiple thousands of workers Ji Qi challenges some of the other “walk the talk” gurus who claim to intimately know their whole organisations. Ji Qi admits instead that he can give real attention to only about twenty of his team and instead has to have total confidence in his layers of management and leadership to cascade his influence into the organisation.

As you read through this highly original book it just keeps giving. Just when you think you have the measure of the author’s drivers and influences; he throws in another essay which is nothing short of a curved ball as it knocks your thinking sideways. Who would have thought a man who built his career on the hotel industry would be telling the reader that a handshake and taking a customer’s baggage is not important? What really matters is that the customer is greeted with a smile and immediately made to feel welcome.

These unique lessons and ideas are a must for entrepreneurs and those who aspire to such a career, but the book has a much wider appeal than this. For those seeking to understand how a workforce operates at optimum performance and how genuine leaders create environments of continuous improvement this collection of resources is a must. Similarly, for those outside of business seeking to gain a greater understanding of humanity they will enjoy discovering Ji Qi’s outlook and perspective on the world. As the book enters its third section simply called Humanity we are introduced again to the authors pragmatism when he looks to the human race and simply declares “People are not born good or evil, and life is not sweet or bitter, the key is how it reflects in our heart.

There is a real danger when reading this type of business book that you could fall into the trap of thinking it is all too easy for Ji Qi. As a billionaire his life has flowed easily for him and challenges were always easily overcome. Not so for this individual who struggled in his youth to attain a place in education and later was dismissed as chief Executive for one of his first senior leadership roles. What makes him different is woven through this book like a golden thread when he says, “everyone’s life can become a work of art”.

As a final note it would be amiss of me not to mention that the author has gone to great lengths to include references to his faith and how his own understanding of a deity who instils freewill rather than predestination is a clear influence on his writings. I am always encouraged by those who are not afraid to include in secular writings aspects of their own beliefs and faith. In a world that is full of anxiety and operating at an unacceptable pace forcing it to lose all understanding of empathy and kindness it is heartening to hear from such a great thinker that he believes future generations will adapt to this speed and find their own tempo.

This inspiring book ends of an immensely powerful yet simplistic assurance to all its readers young and old. Admitting to his own faults in a very honest and open way whilst hoping that others will learn from his short comings this highly successful entrepreneur concludes with a sentence that captures every essences of his publication. “A calm heart is very powerful and will ultimately lead you to the place where you want to be”. This is a book not to be missed.