Create Space – How to Manage Time, and Find Focus, Productivity and Success

Create Space – How to Manage Time, and Find Focus, Productivity and Success 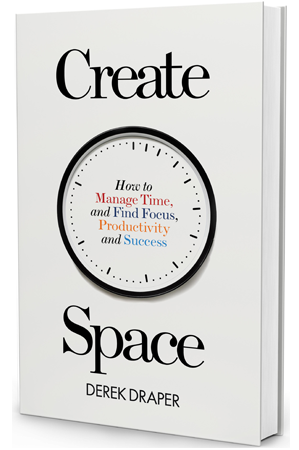 If you were perusing the bookshelves and spotted the front cover of Create Space – with the subtitle of How to Manage Time and Find Focus, Productivity and Success- which is adorned by an image of a clock face, you might be fooled into thinking this is another book about time management. Certainly I expected the usual advice on to do lists, prioritisation and doing
the hard tasks first thing in the morning that such books normally offer. But I am pleased to report that Create Space is much richer, thought provoking and more enlightening than that. Yes, there is a section on space to plan and deliver, which does cover topics such as prioritisation and the importance of planning but this is just one component of the book.

The book is written by Derek Draper, who draws on a wealth of experience coaching and consulting with senior leaders across a range of industries and couples this with references to relevant academic research. The concept of the book was born when the author was trekking in the wide open spaces of Africa and reflecting on how much day to day human life has changed
over the last millennia. As we are all painfully aware, we now live in a crowded, rushed and overwhelming world. As a parent with a full time job and my own business, I can fully recognise this always on world. A fundamental principle of the book is explained by Draper when he writes:  “before you set out to grow as a leader, you must first create the space that you will grow into. Creating space is the a priori task that unlocks optimal personal performance and development.”

Creating Space is split into four main sections on Creating Space to Think, to Connect, to Do, to Be with a final section on the three gateways to creating space.  Each section
is further subdivided and the book can either be read from beginning to end or could be dipped into to explore particular areas. Each section is illustrated with stories of people Draper has coached or worked with followed by lots of easy to use tips, techniques and prompts which could be used to coach others or to challenge your own thinking. Challenging others’ thinking has been a fundamental part of Draper’s style as a coach and one of the things he specialises in is identifying what he calls core pathogenic beliefs. These are deep rooted beliefs we all have which may hold us back from finding success. As the author points out, teams can have core pathogenic beliefs as much as individuals do – and he cites an example of a team which was failing because the team members were being too polite and avoiding conflict. The book is packed with examples of people who had beliefs which were holding them back until they recognised and addressed them.

It’s hard to do the book justice in a short review but some of the key takeaways I got from my first reading are:

>The importance of creating space to “check in” with yourself, to understand your own emotions and what’s going on for yourself as well and taking time to reflect before and after taking action

>A reminder of the important role leaders play in “setting the tone” of a team or organisation. The author gives a number of examples of this including the example of Red Technologies which was being held back by its charismatic but chaotic leader who had a deep rooted dislike for planning which Draper helped him confront

>As mentioned above the book does also cover tips and techniques to help the reader be more productive and ensure they deliver. This includes planning your week, not just your day, to ensure you make time for the tasks which will “shift the dial” rather than always reacting to short term demands such as never ending emails or calls. As Draper advises us, getting key tasks delivered is “largely dependent on knowing ourselves, and creating daily and weekly plans that work with rather than push against our rhythms, energy levels, commitments and deadlines.”

>My favourite section was the one entitled Create Space to be, where Draper reminds us we need to give ourselves space to dream, to balance and grow. Too often these are the facets of life that get squeezed out by the frenetic pace of life. Using tools such as the dual life exercise (what would you do if you had no constraints?) as well as drawing on the work of Tony Schwartz, author of the Corporate Athlete, Draper reminds the reader of the need to renew energy levels rather than constantly expending it.

>Finally Draper pulls all of the strands together into what he calls the three gateways to creating space – setting a strategy, adopting the mindset and raising productivity.

I will be creating the space to re-read this book and to apply some of the tips contained within it and would recommend it to others. Draper describes us as CEOs of our own lives and, as we start a new decade, it seems timely to stop and reflect on what we need to create more space for in our own lives.