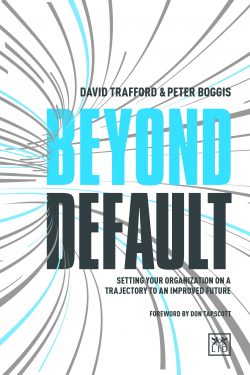 In a world that has lost sight of the ageless skill of prescience Trafford and Boggis have produced a masterpiece of writing that in less than 300 pages delivers a new and innovative approach to developing, applying and implementing executive strategy. Despite asking question after question; (three in the first sentence of the introduction); the writers have managed to produce a startling piece of writing in which the answers are conspicuous only in their absence. It may have been Voltaire who said, “Judge a man by his questions rather than by his answers” but Trafford and Boggis in their book Beyond Default have taken this to a whole new level of understanding.

From the very first page of the introduction the reader is taken on a journey of reminiscence through lists of organisations that either no longer exist or are but a shadow of their former selves. Names tumble through your mind creating memories of what were once commercial giants. Pan-am and Woolworths trigger thoughts of great companies that no longer exist and Kodak and RBS remind the reader that success is a fragile state. And it doesn’t stop there as we are brought into the present day and recall the fragility of both Tesco and Standard Charter Bank which remind us that past greatness is no guarantee of future success.

There can’t be a business leader in post today who does not regularly ask themselves the question ‘where is my organisation going?’ With lists of successful organisations mirrored with similar lists of failed organisations every CEO worth their salt will be wise to consider taking the time to read this book from cover to cover. If the writer’s introduction is a wakeup call against organisational complacency, then the first chapter will have the reader tugging at their collar with embarrassment as they find themselves being challenged to admit to their own Machiavellian beliefs that their success under an old order will hold true for the foreseeable future.

It’s often said that change is the only constant in life, yet humans seem to be hardwired to resist change because of the risks associated with it. Despite this resistance to change, it is more important than ever to acknowledge that tomorrow’s success requires tomorrows solutions not yesterdays outdated initiatives. Napoleon once said, “One must change one’s tactics every 10 years if one wishes to maintain one’s superiority.” In today’s commercial environment Trafford and Boggis remind us that the pace of change in the twenty first century is immensely faster, and it will only continue to accelerate. They assert that organisations and people that don’t embrace change are guaranteed to join the great list of past successes who have careered at high speed on their ultimate default trajectory.

Dennis Waitley once said that “Failure should be our teacher, not our undertaker.” Beyond Default could potentially be the very teacher organisations need to educate themselves successfully regarding how to set a trajectory to an improved future. The education oozing out of this book reminds us that the calibre of an organisation’s leadership is not enough to guarantee long term organisational greatness. Nor are great strategies enough to deliver beyond their brief seasons of triumph. If good is the enemy of great, then Trafford and Boggis have confirmed that business concepts such as TQM and LEAN are the enemy of continuous improvement accomplishing immediate quick impactful wins to the detriment of the long-term stability and growth of their organisation.

However, as I said from the outset, the book does not promise any answers and even though it concludes very early that there must be something that ultimately determines the destiny of an organisation they do not simply present their perceived solution, instead they take the reader on a journey first investigating then experimenting with concepts that could be controlled in a way that increases the chances of success in any organisation.

From the very opening comments in the sleeve of the book Trafford and Boggis never claimed they have discovered a silver bullet of success. They are not selling this book as the complete answer, but what they are doing is bringing into one publication their experience, knowledge and research. Together all these aspects create a unique business manual using “cause and effect” to allow the reader to use the enormous breadth of experience to learn from other successes and failures making sure that whatever trajectory an organisation may pick they do so in the full understanding of how others coped, succeeded or failed following the same path.

I do not like to spoil the secrets of any book and this book has many great kernels of new understanding, but I do want to ensure prospective readers that this read has a powerhouse of examples and experiences intertwined within its narrative. In most cases every book has a sparkle of brilliance here and there that makes you want to keep turning the pages hoping to find another, however, this book excels in its ability to deliver so many enticing pieces of information that you find yourself anxiously reading in anticipation. Whether it is the contrasting views of Greek philosophy and Peter Drucker or the “questions for Reflection” that end each chapter this book keeps you on the edge of your seat. At times it took all my willpower not to jump ahead and look at the reflections before I read each chapter.

With the premise that all organisations, whether public and private, are on a trajectory towards what the writers call their “default future” this book introduces the potential for an alternative ending. Trafford and Boggis have created the concept of organisation predestination, an understanding that every organisation has two options. Option one is to do nothing, and you will end up exactly where your current historic planned course of action will inevitably lead (which may be quite acceptable to you) or option two is to be proactive and take the necessary action required to change the trajectory to an improved future.

For many reading this review I expect them, like me, to initially think so what’s new in this approach. Isn’t this the obvious purpose of a leader to ensure a positive outcome for their organisation. Even General Custer at the battle of the Little Bighorn believed his actions were predisposed to delivering a great victory for the US 7th Cavalry. “There are not enough Indians in the world to defeat the Seventh Cavalry.” However, like many before and since, he failed to see the signs, he ignored the intelligence he was receiving and believed instead in his own providence known at the time as “Custers Luck”. Our writers take this blinding flash of the obvious and turn it into a revelation first penned by Henry Ford yet conveniently forget by most leaders, “If you always do what you’ve always done, you’ll always get what you’ve always got.“ It’s only when we take this learning and keep it at the forefront of our thinking as leaders that we can break this negative cycle and change our organisations default future.

The structure of the book reads very fluently and makes the learning very natural and evolutionary in process. Early chapters set the scene and use very credible live examples of organisations to show both the different types of trajectory and organisational stages current organisations are at. The early chapters are also refreshingly challenging as you are reminded of the accountability of leadership and the positive and negative influences that hustle and nudge you into making good and bad decisions. By the end of the first half of the book the reader’s mind is awash with mixed emotions, feelings of doubt about the current future are regularly flushed out like a high tide as you also consider the wonderful new strategic opportunities being reshaped by every new page of the book.

However, as I have warned at every stage of my review this book will not tell you what your strategy should be, nor does it create a roadmap outlining the step by step guide to developing your new strategy. The Scientist Claude Levi-Strauss described it so well when he said, “The scientist is not a person who gives the right answers, he’s one who asks the right questions.” As the book says from the very opening paragraphs its purpose is to put the spotlight on our organisations, to highlight the inevitable consequences of doing nothing new and to support the readers to develop the questions necessary to help us understand how to successfully change our trajectory.

I conclude my review by commending the writers for producing a new and innovative approach to a subject that should be familiar to most of us. The final uniqueness of this book is how it covers a well-trodden path yet does so in such a way that it is breaking a new trail for those of us who are passionate about changing the future for our organisations.