Futureproofing – prepare yourself and your clients for constant change

In 2010, the five-year-old Tesla Motors had been manufacturing cars—to be precise, one car, the $130,000 luxury Roadster—for only two years. They had sold a grand total of 1,500 of them. Automobile industry insiders scoffed at the idea of electric cars being adequate, let alone superior to internal combustion cars, and ridiculed the company’s plans for autonomous control.

Ten years later, Tesla’s market capitalization exceeds that of the next ten auto manufacturers in the world combined. Their number of units sold made them not only the leading producer of electric vehicles, but the Model 3 was the best-selling car of any kind in California in the first quarter of 2020.

This is what it means to live in a world of technological disruption. When Hemingway’s character Mike Campbell says in The Sun Also Rises that he went bankrupt “Two ways: gradually, then suddenly,” he was also describing how today’s disruption creeps up imperceptibly, yet then becomes overwhelming. Less than two years ago, Tesla was almost bankrupt and widely dismissed.

Are your business coaching clients positioned to be the equivalent of the next Tesla, or of the now-tottering competitors left in their dust? Every industry has the potential to be similarly upended; there are at least ten Tesla-like companies disrupting other sectors to similar extents. COVID-19 gave all of us a taste of what exogenous disruption feels like, but the slower yet inexorable disruption from technology, in particular, artificial intelligence, will exert a far greater impact. As AI grows exponentially—deep learning models are doubling in size on average every three months now—our ability to keep up will be so limited in comparison as to make wide scale disruption the new normal. Imagine the equivalent of COVID every year!

Coaching an individual to not only cope but thrive on disruption is a world-view-changing journey that can rebuild the very foundations of their career identity. Just as Navy Seals are trained for six months to face unpredictable threats, helping someone adjust to the rug being pulled out from under their business can be a life-altering transformation.

Coaching for the future
Futureproofing is the process of becoming resilient against disruption, and we address it in the business as well as the individual, because each has different needs that shape the ecosystem they both reside in. We apply the CHANGE process to businesses:

When we consulted to a boutique Southern California bank, their executives expressed a goal of acquiring younger clients. Through the CHANGE model they realized that their customer representatives were almost all outside the age range of the clients they wished to attract. This realization led to greater awareness of hidden assumptions that shaped important decisions.

When coaching an individual to become more resilient and innovative within a business undergoing CHANGE, we apply the RIPPLE process to identify areas to address:

Ready or not, here comes the future
Preparing for disruption is no longer an option for members of businesses that want to survive. As a coach, you are probably familiar with Maslow’s Hierarchy of Needs, a pyramid model asserting that physical needs (food, etc) must be met before an individual can grow in their emotional, social, etc, expression, culminating in self-actualization: reinventing themselves. We assert that in the face of disruption, the pyramid is inverted for organizations: that the very survival of the enterprise depends upon its principals driving transcendence, of themselves and the business.

Not every business will disrupt the world with a meteoric passage like that of Tesla Motors; but all businesses, like it or not, now live in an ecosystem shaped by dramatic disruption. Just as companies must learn that their survival may now depend upon their people achieving the self-examination and transformation that coaching can deliver, coaches need to understand the dynamics of the technological forces that are transfiguring our world. The future calls all of us to become our best selves.

The Diffusion of Innovation Curve

Everett Rogers showed how a few early adopters respond to new development at first, then increasing numbers join the bandwagon at increasing rates until the curve levels off as the remaining laggards join in. 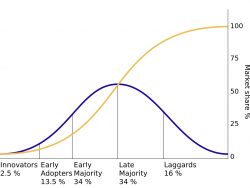 The U.S. Army War College developed the VUCA model for interpreting a world whose threats changed drastically following the Cold War. In the context of a business environment, the stages and questions for an executive within them are:

The Cynefin framework (from the Welsh word for habitat) developed by Dave Snowden at IBM Global Services describes five domains that any individual or business may find themselves encountering. Learning to recognize and respond appropriately to each domain helps them make better decisions.

Cynefin is used primarily to consider the dynamics of situations, decisions, perspectives, conflicts, and changes in order to come to a consensus for decision-making under uncertainty.

Only a quarter of firms prepared if CEO steps down tomorrow

Gen Z rejecting side hustle culture in favour of balance

Responsible employers must do more than just sign menopause pledge

Why technology is key to improving public sector agility

Supporting army reserves in the workplace

How Ukrainian HR leaders have acted during the invasion