How ethnic diverse are FTSE 100 boards?

Top firms’ leadership pipeline improves for first time in four years. Ethnic diversity in leadership pipeline within FTSE 100 companies increases to 5 percent, the highest level for four years. From Raj Tulsiani, CEO of Green Park and with comment from Baroness McGregor-Smith CBE, Vice-chair of DRIVE (Green Park’s social enterprise) and author of Race in the workplace.

But six-in-10 (58 percent) main boards of Britain’s biggest companies have no ethnic minority presence, despite the Government’s Parker Review recommending no FTSE 100 board should be exclusively white by 2020. Green Park’s Leadership 10,000 report shows gender diversity in leadership is now moving back in more industries than moving forward

A new study from Green Park shows the leadership pipeline, supplying the highest tier of management in FTSE 100 companies, features the highest level of ethnic minority talent in four years. Progress is being made with ethnic minorities moving up the management funnel, though at five percent of those in the pipeline it still is not a fair representation of British society.

While the pipeline is improving there remains a question over whether minorities can break through the glass ceiling, as the top roles in companies remain a closed shop for ethnic minority and female leaders. There has been a decrease of 18 percent in the number of ethnic minorities holding positions at Chair, CEO and CFO level in FTSE 100 companies.

Almost six in 10 (58 percent) main boards in the FTSE100 currently have no ethnic minority presence. This is a slight improvement on the 62 companies that recorded all-white main boards in last year’s report. Yet it calls into question whether the target set in Sir John Parker’s consultation document that no FTSE board should remain mono-racial by 2020 will be met.

The Green Park Leadership 10,000 report analyses the backgrounds of those holding the top 20 leadership roles within FTSE100 companies including CEOs, CFOs and Chairmen. It also analyses the next 100 senior roles to identify the future management pipeline. It reveals that despite a net average increase in diversity over last year’s report, there remains a glass ceiling stopping talented minority candidates reaching the upper echelons of management and worryingly, previous progress and momentum are starting to reverse.

Positive advancement
Green Park’s analysis also looked at the firms that were out performing the rest of the FTSE100 in terms of diversity. InterContinental Hotels Group plc is the top performing FTSE 100 company in Green Park’s rankings for gender and ethnic diversity, followed by Standard Chartered plc and Unilever plc.

Table one: Top 10 FTSE companies measured by diversity of leadership 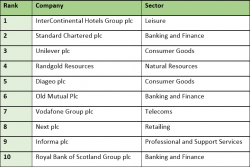 Baroness McGregor-Smith CBE, Vice-chair of DRIVE (Green Park’s social enterprise) and author of ‘Race in the workplace: The McGregor-Smith review’2 commented: “Despite the Leadership 10,000 report showing that every industry in the FTSE100 still needs to do better with proportional diversity, the findings provide actionable baseline data for the index to improve their leadership’s diversity, moving them closer to achieving the diversity dividend.

“This report’s data paints a clear picture of current-state diversity across the index and can be used to pro-actively take diversity conversations to the boards of our leading companies to show minority communities that they are a priority to the companies they work for.”

Raj Tulsiani, CEO of Green Park, said: “In a world where access to top talent from abroad may be increasingly limited, it would be foolish for major enterprises to continue to ignore talent from underrepresented groups. The reduction in female leaders in so many industry sectors is a worrying trend, especially as it coincides with the first rise in BAME representation in four years. Given the need for greater cultural empathy in a post Brexit Britain being able to move forward sustainably will become an increasingly important element of brand trust in the eyes of the public, regulators and institutional investors.

“What we are seeing is a trend to ‘tick the boxes’ in diversity recruitment. FTSE companies have had initiatives to improve gender diversity on the board, but now appear to be focusing more on improving their pipelines of future leaders from ethnically diverse backgrounds. The organisations that succeed will adopt a more inclusive overall recruitment strategy, rather than addressing each initiative in isolation.”

Key findings from the report

Gender diversity
There has been an increase of one in the number of female Chairmen and CEOs within the FTSE 100 since Green Park’s previous report. There is a small increase of 2.3 percent in the number of women at the Top 20 level and 1.1 percent at the Top 100 level. However, the number of industries where gender diversity is regressing is now outweighing those that are improving with eight moving backwards at Top100 level and four moving backwards at Top20 level. The number of female CFOs has remained stagnant and the percentage of women holding top jobs across the index is still just 6 percent. Three quarters (76 percent) of the total employees in top 20 positions across the FTSE 100 who graduated from a Russell Group university are female while 70 percent of leaders who graduated from an Ivy League university are female. Overall, this means that women are three times more likely to need a qualification from a prestigious university to gain a board position in the UK than men.

Ethnic diversity
Taking the top 10,000 roles as a whole, the pipeline to senior positions for ethnic minorities is being diversified but only in specific industries. There has been an increase of 451 (102 percent) ethnic minority executives throughout the FTSE 100 leadership this year, a collective increase of 0.5 percent and 5 percent at Top 20 and Top 100 level respectively. Analysis of industrial sectors shows that telecoms, health and banking and finance are attracting and promoting ethnic minority talent in increasing numbers, with telecoms showing a 20.1 percent increase in minority leaders at Top 100 level due to 52 new hires at BT and Vodafone.

Is it always appropriate to promote your ‘best’ employee into a people management role? ARTICLE BY: Viola Lloyd | Published: 9 April 2018

Unlocking capacity is key to thriving in economic downturn

Part-time working in retirement is rising

How to build a culture of conscious leadership

Is your employer brand rolled in glitter?