The New role for HR following the Covid-19 Pandemic

The past 30 years has seen the HR function change from the post-personnel time of welfare, disciplinaries and training courses through the ‘place at the table’ period when people were our greatest asset, to the current Human Capital Management, 3 Box Ulrich++ model. The profession peaked as a multiple stakeholder influencer but has now become a function whose key responsibility is cost control and protecting shareholder return. HR’s role has mirrored the changes in business and economics. It is now time for HR professionals to re-assert their leadership to build new ways of working that create sustainability for organisations and their people.

The Covid-19 pandemic casts a new light on people at work and society: 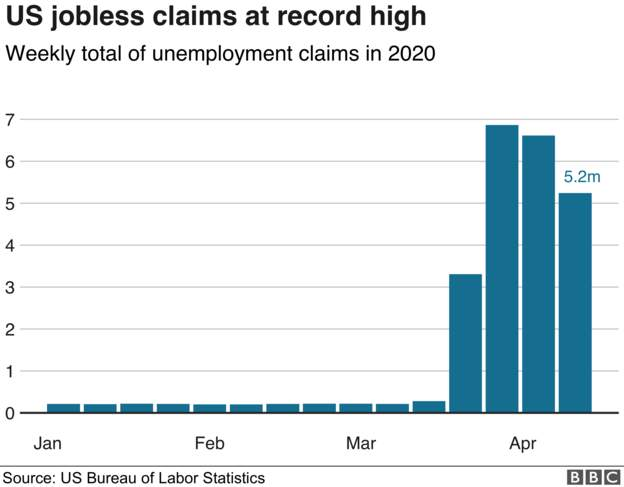 Source: US Bureau of Labor Statistics

There are many positive things happening in the world:

Time to Reset the Clock?
It is possible that the future world may look back at the Covid-19 epidemic as the catalyst for a better way of living that protected our world from looming global issues that had the potential to create a full scale human existential crisis.

Since 1947 the members of the Bulletin of the Atomic Scientists have evaluated the world in the context of global issues that have negative consequences for humanity. They summarise the total risk using a clock with its hands set towards midnight based upon the lifespan of mankind on the planet. The initial clock was set at 7 minutes to midnight. At its most optimistic in 1991 the clock was set back to 17 minutes to midnight.

Source Bulletin of the Atomic Scientists

Directly prior to the Covid-19 pandemic the clock was at its most pessimistic ever setting at 100 seconds to midnight. The twin causes of this are the continued failure to combat climate change and increased global tensions between the US, Russia and Iran potentially leading to nuclear exchanges. According to this measure the world was in a far from secure place even before the pandemic began.

The End of the Neoliberalism Experiment.
During the last 40 years the dominant economic doctrine has been Neoliberalism. The model idolises the value of free market competition and easy movement of trade and capital. Its core belief is that sustained economic growth is the means to achieve human progress and that the most efficient allocation of resources comes with minimal state intervention in economic and social affairs. In realty the application of this model has had the following effects:

Businesses measure success by growth in revenue, profits and shareholder returns. Countries measure their success in a similar way with the assumption that growth in GDP will create more wealth and taxes to use for the public good. Global GDP is expected to double in the next 25 years. The environmental and social price of this growth is almost certainly too high. 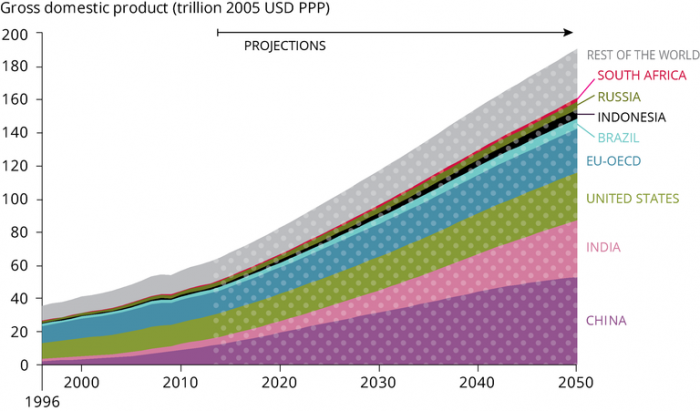 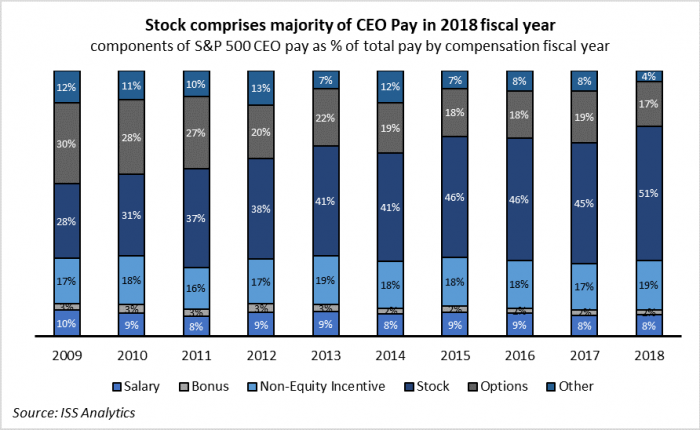 Time for a New Economic System
People growing up in the last 40 years may be forgiven for thinking that the current way of running the planet is the only way. It is not. We have made choices. We can make new ones.

Mark Carney the retiring governor of the bank of England has written in the Economist this week that the pandemic could cause a fundamental shift in how companies in future will be judged based on how they treated people in the crisis. There is a growing body of economists challenging the status quo and providing options to take the world in a fresh direction:

They all argue we can choose to develop a system that:

Doughnut Economics
The Doughnut Economics model consists of two rings. The inner ring of the doughnut represents a sufficiency of the resources we all need to lead a good life: food, clean water, housing, sanitation, energy, education, healthcare, democracy. Anyone living inside that ring, in the hole in the middle of the doughnut, is in a state of deprivation.  The outer ring of the doughnut consists of the Earth’s environmental limits, beyond which we inflict dangerous levels of climate change, ozone depletion, water pollution, loss of species and other assaults on the living world.

The area between the two rings – the doughnut itself – is the “ecologically safe and socially just space” in which humanity should strive to live. The purpose of economics should be to help us enter that space and stay there. 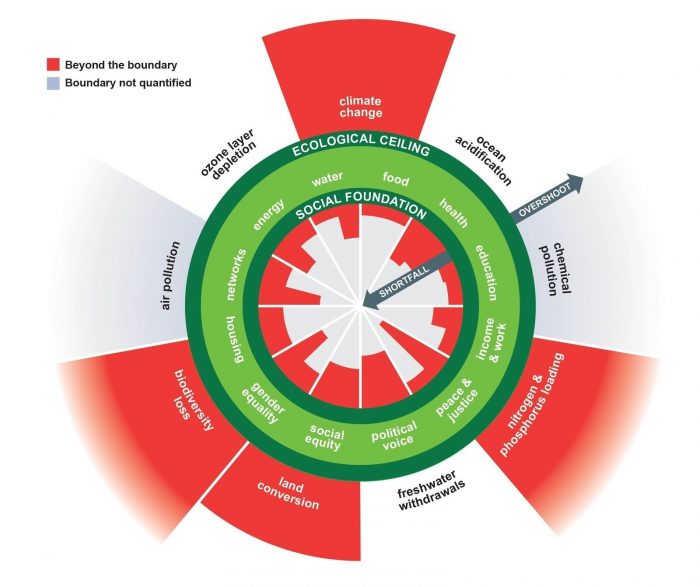 As well as describing a better world this model allows us to see the state in which we now find ourselves. At the moment we transgress both boundaries. Billions of people still live in the hole in the middle. We have breached the outer boundary in several places.

The model suggests that we should focus our energies on ensuring that the world and its people live within the boundaries of the Doughnut.

Eating the Doughnut in Business
Businesses will have different attitudes to the Doughnut model and based on what we see of current approaches to climate change initiatives Raworth points out they will:

Or decide that the reason we are in business is to Eat the Doughnut!

What would happen if, following the Coronavirus outbreak, every business in the world decided that their primary purpose had to be underpinned by its principles?

Amsterdam Council is going to adopt the Doughnut economic model in its virus exit Strategy.

Deputy Mayor Marieke van Doorninck invoking her city’s current housing crisis as an example. The doughnut does not deliver answers, she said, so much as a way of looking at a problem “so that we don’t keep on going on in the same structures as we used to.”

This, for Raworth, is the core lesson to be learned from the pandemic. “The world is experiencing a series of shocks and surprise impacts, which are enabling us to shift away from the idea of growth to ‘thriving. Thriving means our well-being lies in balance. This is the moment we are going to connect bodily health to planetary health.”

Applying Doughnut economics to business looks something like this:

Role of the People (HR) Team from 2020
To establish a refreshed role, HR teams will need to be brave, challenging and work together to assert professional standards and create better and more consistent systems in which people can flourish. Shaping our organisations, leaders and ensuring the best way to work is a huge responsibility for those working in HR.

The core role of the People Team is to ensure the purpose, culture and values of the organisation fully connect the stakeholders:

People Team focus is closer to the Key Workers
The Coronavirus has identified the key workers needed to keep business and society afloat in a crisis. They are smart, they know the problem and the solution, and our customer needs them. People (HR) Team structures need to shift from a few strategic relationships with senior leaders to be the connector for the business, understanding the situation of each layer from front line to executive. They need to ensure there are clear plans to fill communication or skills gaps at each level and create inclusive career and information flows.

People Team role to create an abundancy of talent and You are included!
More than a million UK people volunteered (for free) to help their neighbours during the crisis. Hundreds of thousands went out to find new roles when their old job suddenly disappeared. People want to be included and to have a mission in life and to help. The People Team’s role is to ensure their business has a clear purpose and lets everyone know how they are important and how they can play a part. The People Team has a key role to ensure the way the company purpose is described and how it is communicated energises people and pulls the team together.

The People Team needs to ensure all leaders have the core skills needed to coach and connect people to the business purpose, their colleagues and their own strengths. It needs to create a Growth Mindset environment where everyone can be involved and develop.

The People Team needs to be expert at building career networks that give employees the broadest and most diverse set of opportunities for learning and take the lead in designing organisation and career structures that meet the needs and demands of the individual, the organisation and society.

The People Team’s role is to build a new leadership and teamworking model
This pandemic has polarised leaders. There are those who are able to provide effective coaching that connects their team, puts them in control and in a state of confidence to deliver great performance whilst demonstrating true care for them as people, and those that have nagged and micromanaged their way through the crisis. People will look back at how they were treated during April 2020 and consider what they need in future from their company and especially from their leader.

Employees will expect more of their leader and the value they bring to the CAP relationship both for them as an individual and for the team(s) in which they operate. The team environment needs be based upon building strong connections and appreciating our diversity and personal needs – we have received new windows on each other’s lives during the current crisis and this could provide a better foundation for future work together.

We need our leaders to have core skills in developing outstanding teams where they build trust amongst the team. They need to encourage effective debate and productive conflict leading to high levels of commitment and personal desire to be accountable for success and results. They are able to do this equally well with co-located and remote teams. It is the People Team’s role to provide the support, coaching, models and training so that as many leaders as possible can make it into the new paradigm.

When we come to measure leader performance, we focus on how they have grown their people and their teams and the depth of engagement their people feel working around here before we talk about the results.

The People Team’s role in creating Deep Employee Wellbeing
The pandemic has been a testing time for many people with multiple aspects of their wellbeing simultaneously challenged. As we emerge from this period the People Team will need to ensure the business is able to make an authentic contribution to each aspect of wellbeing for its people:

And finally, to summarise how to measure success of the People Team in the Post Pandemic world…

Unlocking capacity is key to thriving in economic downturn

Part-time working in retirement is rising

AI is a tool to assist, but don’t underestimate the power of empathy

How to build a culture of conscious leadership

Is your employer brand rolled in glitter?