Now Chinese is the language of choice in business

The average salary for finance jobs requesting Chinese speakers was £41,573 across the UK – an average £7,647 higher than the average pay promised to professional Chinese speakers! The second and third most lucrative languages in the industry were German (£38,512) and French (£36,759) respectively.

Conducted in January 2017, the study examined data from over 1 million live job vacancies to analyse recruiters requirements for language skills within the UK finance sector.

In spite of the fact that Britain is due to leave the EU in just over a year, these were not the only European languages in high demand. Spanish and Italian also made the top of the list, seeing a combined total of 446 vacancies across the UK.

Languages Worth More With Finance Skills
A salary premium for working in tech was seen in almost every language. Chinese topped the tables again earning a whopping £7,647 more than the average salary of all Chinese-speaking roles. Portuguese followed closely behind with a premium of £6,745.

Surprisingly Japanese was the sole language to not see any premiums. Despite being the highest paid language of 2017, the average salary for finance jobs was £395 lower than all Japanese roles. According to our study from last year, the tech industry is where this language is most valued with Japanese speakers earning up to double the pay of their non-tech Japanese speaking counterparts.

London the Land Of Opportunity?
It’s well known that working in London will tend to give you a bigger pay check than those living outside of the capital. Italian speakers who worked in finance and also lived in London saw premiums of £8,103, when compared to those who lived further afield and German speakers could earn an extra £9,110 if willing to move to the big city.

But with higher living costs in London compared to the rest of the UK – as well as the majority of all vacancies being outside of the capital – you may want to have a long think before packing your suitcases! 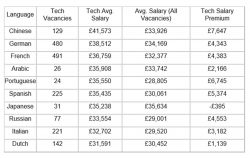 Jobs soared in September as firms adapt to new reality ARTICLE BY: a | Published: 13 November 2020

How to support employees facing the menopause

What Squid Game tells about the scourge of debt

Twenty-Five per cent of women more likely to leave financial services workforce due to menopause experience ...

Has COVID changed your culture?

There’s unorthodox… and then there’s inhuman

Are empty nesters a flight risk?