The Heartbeat of Excellence – The Design of Changing Sustainabily, the Swiss Way

The Heartbeat of Excellence – The Design of Changing Sustainabily, the Swiss Way 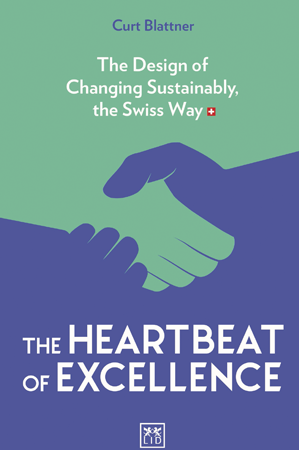 It has long been stated and accepted that one of the clearest definitions of organisational excellence is defined as an “internal framework of values, standards, processes and behaviours” that are guaranteed to engage and motivate employees in a way that will inspire them to deliver products and services that not only fulfil customer requirements but do so within predetermined business expectations. Or more simple stated organisational excellence is consistent superior performance.

The traits and attributes of organisations that attain the definition of excellence have historically measured characteristics covering a range of aspects of organisational operation. Looking at the structure of both the Malcolm Baldrige National Quality Award and the EFQM we find a significant similarity in a number of these attributes including leadership, strategy,
process management and people. Whilst different in approach the Deming Prize also lists some similar attributes such as strategy it also adds some additional characteristics including education, standardisation and results.

And now into this mix comes a new book, the first publication from Curt Blattner. “The Heartbeat of Excellence” a book that doesn’t waste time with pleasantries or civilities, its purpose as defined within its title is to establish from the outset in the minds of the readers his fundamental and distinctive view on how to ensure excellence sits at the heart of any organisations values . Even before we reach page one the book’s preface is presenting to the reader a proposition that the content that awaits you is unique and possibly unprecedented and having it read it I could not disagree.

Whilst for many business books you need to get through the initial introductions and scene setting so that the writer feels you are well placed to consider the rationales that await you. In the case of this publication you haven’t even read the second paragraph of the preface before you encounter a cow queen and a wrestler king in an opening that grabs your attention and ensures you are already sold on the idea that this book was going to be at least intriguing if not completely mind blowing.

At the heart of this book is a concept that the author explains very simply when he introduces you to the “Swiss Way” Having held a number of leading positions for the Global Giant Nestle, Blattner takes the cultural values of fairness and respect so engrained in the very essence that is Switzerland and shows how they naturally migrate and influence the culture
of one of that country’s most successful businesses Throughout his book Blattner shows the significant influence the Swiss direct democratic governance and non-hierarchical politics has had on his thinking and how when he takes this learning back into the workplace it results in successful business outcomes. In simple terms we are told that when you apply the values of fairness and respect into the workplace, when you develop a leadership model that has as its foundation trust and honesty the consequential result is long term sustainable high performing teams.

In reviewing business books, the key to their credibility is the discovery of evidence that the writer has already put the concepts into practice and can provide sound personal evidence to the reader of the outcomes. Like an oasis in the desert chapter six of the book offers a wonderful insight into the confidence and enthusiasm felt by Blattner and the other managers. In
an example as exciting as selling coal to Newcastle and ice to the eskimos, Blattner shares the very exciting journey of trying to sell coffee to Italy and how that has left its mark on his thinking and his approach.

There is always an expectation when you open a book with themes like “a new leadership style”, “excessive planned change kills trust” and “the team and leader as fractal” that there will be a degree of excess in the thinking and even the potential for radical ideas. In the case of the Heartbeat of Excellence it is a very difference story as you work through a
very logical set of thought processes that are regularly backed up with either practical examples or reasoned rationale. Predicated on a national philosophy the book is presenting a unique approach in a very calm and measured way.

However, don’t be fooled into thinking that this means the book lacks energy or excitement. At a time when we see societal changes mirroring globally across the world as people demand a voice and  expect it to be listened to Blattner’s book has arrived in a very timely manner promoting a model for people centred management when our world is demanding people centred government. From start to finish the book presents many new and innovative approaches all of which stop the reader in their tracks as they read and often re-read them. The book is
very well constructed and I believe is deliberately designed to keep the reader unsettled as it takes you in and out of paradoxes such as the opening chapter with a title of “a paradigm shift in the journey to excellence” and then quickly afterwards the book reveals how a balanced environment can take technical knowledge, management influence and an inspired workforce and produce a model of excellence creates the potential for unencumbered success.

At the heart of the publication is the philosophy of the three contracts of emerging change. I do not intend spoiling the books journey for you by revealing too much about this as you need to read it in the manner it has been skilfully constructed to get the full impact. However, don’t be surprised if the book brings a level of unease to you as the reader. You may,
like me, as you get closer and closer to the conclusion of the book feel that you had just read a blinding flash of the obvious with every chapter making more sense than the last yet in an even more worrying way you note that whilst it now seems so logical you have not reached this conclusion prior to reading it in Blattner’s publication.

I don’t believe I have read a business book before that refers to Tom Peters, Roger Federer and William tell in equal measure, but like so many other aspects of the book the writer does so in a way that flowed naturally across many centuries. In similar vein I also find the book embraces emotions in a way very rarely included other than as aspects of EI. However
once again the arena of conscious and unconscious knowledge and its impact on feelings is another exiting aspect of the book, I don’t want to spoil for you.

Instead I leave with you the thought that the “Heartbeat of Excellence” has the potential to provide you with an option to create a new and more successful approach to delivering change and creating a culture of excellence. With a myriad of books already on the shelves of the business section offering their solution and roadmap to excellence this book comes as a genuine alternative with fresh thinking and a solid foundation.  Offering a detailed alternative to our accepted culture change models this book produces a very rationale offer that provides a new and sustainable model of change and organisational excellence.